Wonderful Adventures of Mrs. Seacole in Many Lands: A Black Nurse in the Crimean War (Aziloth Books) (Paperback) 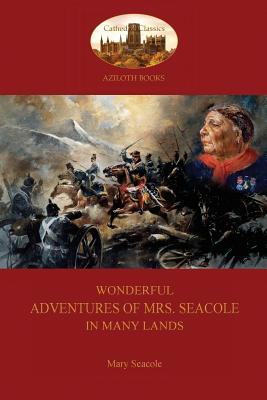 Wonderful Adventures of Mrs. Seacole in Many Lands: A Black Nurse in the Crimean War (Aziloth Books) (Paperback)

Mary Seacole was born in 1805 in Jamaica, the daughter of a Scottish soldier and a free black woman. From her mother she learned traditional African herbal medicine and also incorporated European medical ideas into her treatments. When the Crimean war began in 1853, she offered her services to nurse the wounded but was rejected. Undeterred, she set up the 'British Hotel' just behind the lines, selling food and drink and caring for injured soldiers. This book is the story of those times, told in Mary Seacole's own words, a time when 'Mother Seacole' was a familiar figure on the front lines, traveling with two mules packed with food and medicines, and alleviating, in the words of another eyewitness to the conflict, Lady Alicia Blackwood, "the sufferings of those around her; freely giving to such as could not pay, and to many whose eyes were closing in death, from whom payment could never be expected." In 1991 Mary Seacole was awarded the Jamaican Order of Merit; she was voted the greatest black Briton in 2004.