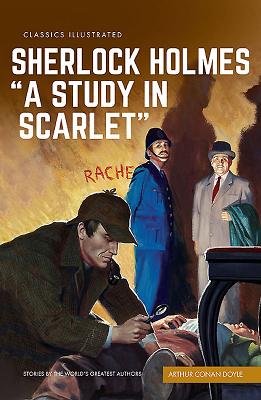 
This title is likely unavailable. Email or call for price and availability.
In "A Study in Scarlet", when a man is found lying dead in a room, with only the word "Rache" scrawled on the wall as a clue, it is up to Sherlock Holmes and Dr. Watson to solve the case In "The Speckled Band", Holmes must solve the mysterious death of a young woman's sister, before it is too late Classics Illustrated tells these wonderful tales in colorful comic strip form, offering an excellent introduction for younger readers. This edition also includes a biography of Sir Arthur Conan Doyle, a list of all of Conan Doyle's Sherlock Holmes mysteries and study questions, which can be used both in the classroom or at home to further engage the reader in the story. The Classics Illustrated comic book series began life in 1941 with its first issue, Alexandre Dumas' "The Three Musketeers", and has since included over 200 classic tales released around the world. This new CCS Books edition is specifically tailored to engage and educate young readers with some of the greatest works ever written, while still thrilling older readers who have loving memories of this series of old. Each book contains dedicated theme discussions and study questions to further develop the reader's understanding and enjoyment of the work at hand.