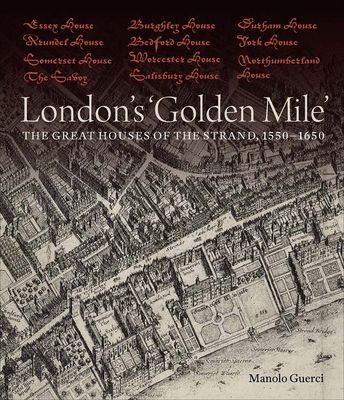 
This title is likely unavailable. Email or call for price and availability.
A reconstruction of the ‘Strand palaces’, where England’s early‑modern and post‑Reformation elites jostled to build and furnish new, secular cathedrals

This book reconstructs the so-called "Strand palaces"—eleven great houses that once stood along the Strand in London. Between 1550 and 1650, this was the capital’s "Golden Mile": home to a unique concentration of patrons and artists, and where England’s early-modern and post-Reformation elites jostled to establish themselves by building and furnishing new, secular cathedrals. Their inventive, eclectic, and yet carefully-crafted mix of vernacular and continental features not only shaped some of the greatest country houses of the day, but also the image of English power on the world stage. It also gave rise to a distinctly English style, which was to become the symbol of a unique architectural period. The product of almost two decades of research, and benefitting from close archival investigation, this book brings together an incredible array of unpublished sources that sheds new light on one of the most important chapters in London’s architectural history, and on English architecture more broadly.

Distributed for the Paul Mellon Centre for Studies in British Art
Manolo Guerci is an architectural historian, and senior lecturer and BA RIBA Part 1 programme director at the Kent School of Architecture and Planning, University of Kent.