Brickwork: A Biography of the Arches (Paperback) 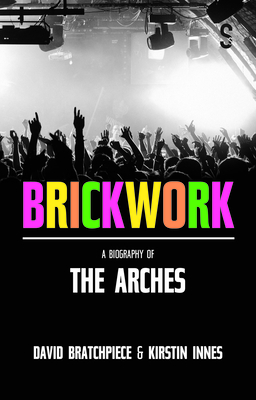 Brickwork: A Biography of the Arches (Paperback)

Nightclub, theatre, creative hub, party place, and one of the most important venues in Scotland, Britain and Europe: for almost 25 years, The Arches was the beating heart of Glasgow.

In 1991, former punk-turned-theatre director Andy Arnold walked into the disused red brick Victorian railway arches underneath Glasgow's Central Station and immediately saw the potential of the space. Not even he could have imagined its future, as simultaneously one of the biggest and most famous nightclubs in the world and a major player on the European theatre scene. Until its closure following a drug-related death in 2015, The Arches carved its own, indefinable path, playing a vital role in the lives of many Scottish artists along the way. Some of those stars of the future began their careers taking tickets, hanging coats and serving drinks there.

For the first time, the people who made the venue get to tell their story. Piecing together accounts from directors, DJs, performers, clubbers, artists, bar tenders, actors, audiences and staff, Brickwork writes the biography of a space that was always more than its bricks and mortar.

Kirstin Innes is an award-winning novelist and journalist, and a former Arches employee. Her first novel, Fishnet, won The Guardian's Not The Booker Prize; her second, Scabby Queen, was published by 4th Estate to critical acclaim in 2020 and longlisted for the Gordon Burn Prize. As a journalist she's written for The List, Herald, Independent, Sunday Post, Scotsman and Scotland on Sunday, and twice won the Allen Wright Award for Arts Journalism. 'Gripping and moving. A literary triumph.' Nicola Sturgeon 'Scabby Queen is vibrant, vital, relevant, brilliant, ambitious and so truthful.' Jenni Fagan David Bratchpiece, a long-time Arches employee, is a comedian, writer and occasional actor who has performed stand-up all over the UK as well as at the Edinburgh Fringe and Glasgow International Comedy Festivals. His short plays have been shown at the Gilded Balloon in Edinburgh and Tron Theatre in Glasgow and he has previously written for BBC Radio, Empire, Mixmag and The List. Brickwork will be his first book.