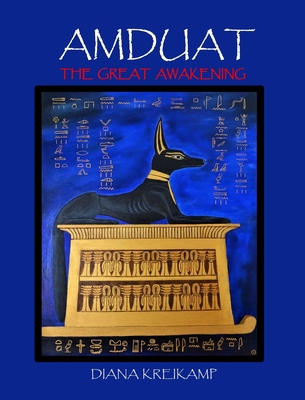 The Egyptian Amduat, "Book of the Hidden Chamber", is a fascinating text from ancient Egypt that describes the journey of the deceased. It tells of a twelve hour long voyage beyond death through a mysterious realm known as the Duat.

Most people are curious about what happens after we make our departure into the Afterlife. The most pressing question usually entails the finality of it all. Is death truly the end of life, the end of our being? Or is death merely the transition to a new place where we can continue our life in a different form? Unfortunately, no person living on earth is able to provide an answer to shine a light on this mystery. The Egyptian Amduat, "Book of the Hidden Chamber", however, provides a solution to this riddle as it promises that every human being, embarking on this journey, will renew himself to eventually rise from the dead. It clearly describes the entire journey after death through texts and illustrations. According to the Amduat, it was a journey which lasted twelve hours starting at dusk and ending at dawn.

In the decade the author worked on this text, she discovered that the journey, as described in the Amduat, is a voyage of Initiation. During the journey the old consciousness, symbolised by the Sungod R , is dissolved and transformed into the birth and awakening of a renewed consciousness, which is symbolised by the God Khepri. The process is not limited to the post mortem state, for it occurs during life as well. Therefore, not only the deceased, but every living being on earth can embark on the voyage in question. The group of elite priests in ancient Egypt knew this fact well and used the Amduat to become initiates themselves.

Today, the Amduat is still a system qualified to heighten our consciousness. The texts with the corresponding images serve as a guide to show the way to our goal. The inner Sungod teaches us how to navigate safely and transform the psyche's destructive forces into constructive powers. This life changing magical journey provides us with the opportunity to look ourselves in the eye, honestly and sincerely. It is a wake-up call to allow us to see who we really are- divine beings- and to become reborn as our Greater Self. This grants us the power to reconnect with our true potential and to manifest all our gifts and talents in life itself.

The book, The Great Awakening; the Way of the Amduat, presents the entire Egyptian system in an unique and interesting blend of academic and esoteric knowledge, intertwined with the author's personal experience of the system itself. The text of the Amduat is explained in clear and comprehensible wording translated to suit our modern age. It is also a practical workbook to teach the reader how to embark on the Sun barque, together with his or her inner Sungod, to make the inspiring voyage of inner awakening. The subsequent gradual transformation and the manner in which it takes shape in daily life, is explained hour by hour from an academic, esoteric and practical perspective.