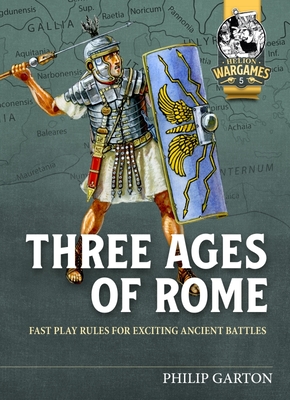 
This title is likely unavailable. Email or call for price and availability.
No rebasing required, can be played with all current basing styles and conventions.

For seven centuries, the history of Rome was central to the history of Europe. This story of expansion and decline is the inspiration for these wargames' rules.

Designed for ease of play, Three Ages of Rome offers a player experience based on the commander's problems. The rules are designed to create a feel for the uncertainty of ancient battles. Most games should take 2-3 hours to play.

Keeping your men going, even when things don't seem too good, is critical for success. Units are likely to become progressively disabled and cohesion begins to suffer. If commanders don't take care to maintain cohesion, then they could be heading for disaster

The Age of Expansion (300BCE - 30BCE) starts with Rome's wars against Carthage. Followed by Rome against Macedon, Rome against the Gallic Celts, and several civil wars between the Romans themselves. One struggle lasts through the period as Rome struggled to conquer the Spanish.

In the Age of Empire (30BCE-200CE) the Romans moved north and west conquering territories in Germania and Britain. Spreading east, they campaigned against the Dacians and the Parthians. The Parthian kingdom was destroyed by an internal revolt and a new dynasty, the Sassanids, came to power. They would become the major threat to Rome's eastern frontier. Despite its successes, the Empire was not stable. The civil wars continued. In 69 CE there were four emperors. In 193 CE there were five emperors This Age ends in 200CE after Septimus Severus eliminated the other claimants for the title.

The Age of Decline (200CE-450CE) sees Rome struggling against pressures from outside the Empire. The wars with the Sassanids continued with successes and included defeats for both sides. The German tribes joined together but they were mostly repulsed. Some new enemies, the various Gothic tribes and the Huns, pressed through the frontier. These raided deep into Roman territory doing major damage to Roman cities, including Rome itself. The pressure was too great and the Roman Empire broke up. The western half would not last for long but the eastern half would rise again as the Byzantine Empire.

The six historical battle scenarios span the Three Ages and provide different challenges. They offer players an insight into the nature of command in ancient warfare. The Terrain Generator and Scenario Generator allow the players to develop their own games. For competitive games, a system of points gives players all the information needed to exactly balance their forces.

In battle nothing is certain but generals that practice their skills are more likely to be victorious.