The Age of Alexander: Using Three Ages of Rome to Fight the Wars of Alexander the Great and His Successors (Paperback) 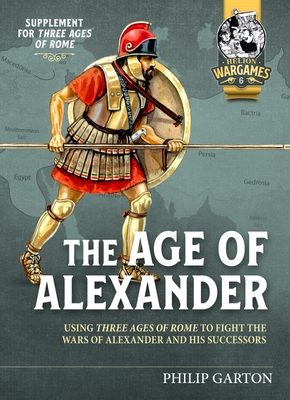 The Age of Alexander: Using Three Ages of Rome to Fight the Wars of Alexander the Great and His Successors (Paperback)


This title is likely unavailable. Email or call for price and availability.
Before the birth of the Roman Empire the history of the Classical world was dominated by the history of Greece, its cities, and kingdoms. The best known of these stories is the achievement of Alexander, son of Philip of Macedon, who would become known to the world as Alexander the Great.

The Age of Alexander starts with Alexander as King of Macedon. He convinces the Greek states to join him in the conquest of their traditional enemy, the Persian Empire. Moving into the Persian lands he fought several battles, defeating the Persians, and taking control of what is known today as the Middle East. Alexander forged the largest empire the world had seen but there was more. Moving east he campaigned against the Scythians and crossed the River Indus into India. The army of the Indian King Porus included numerous elephants which was different from anything that Alexander had met before. These beasts impressed the Macedonians and they would come to be a frequent element in the armies of Alexander's Successors.

Unfortunately, Alexander died before he could achieve his vision for his Empire. The territories were shared between his generals (the Successors). These men then fought against each other, trying to increase their personal power. The competing pressures were too great and Alexander's Empire broke up. The next century would see many wars between the Successors and their various descendants.

Watching from the west, the Romans saw a chance to take advantage of the weaknesses of the individual Successor states. They started by invading and conquering Macedonia. They followed this success with wars against the Galatians, and the various Successor states across the Middle East. These wars included the conquest of the Ptolemaic dynasty of Queen Cleopatra, which became one of the most famous stories in history.

This book provides an expansion to the Three Ages of Rome wargames' rules. The six historical scenarios span The Age of Alexander and link directly into the first period of the Three Ages rules. The new army lists introduce armies from across the period of the expansion set. They complement the armies in the original set of rules enabling players to recreate more battles from the ancient period.

As in the Three Ages, in battle nothing is certain but generals that practice their skills are more likely to be victorious.