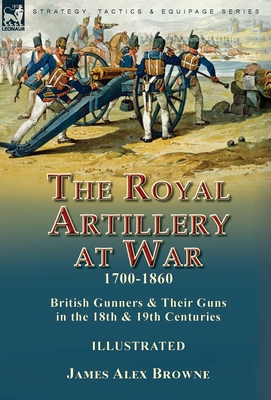 
Available in Warehouse. Wait for Email Confirmation for ETA
This book cannot be returned, cancelled, or exchanged. Please call for availability and pricing
The exploits of outstanding artillerymen

This book begins with the activities and equipment of the gunners during the War of Austrian Succession and the Seven Years War as it was fought across the globe. Although campaigns and actions are considered generally the exploits of noteworthy individuals are also interestingly detailed. The defence of Gibraltar is particularly well considered. The end of the 18th century brought the rise of Revolutionary France and the dawn of the Napoleonic period. The guns and notable gunners of the Peninsular War, the War of 1812 and the Waterloo Campaign of 1815, are extensively described in these pages. Later in the 19th century the actions in Syria in 1840, wars against Kaffir tribes in South Africa, the Crimean War of 1856, the Opium Wars and conflicts with the Maoris of New Zealand are well covered. In its original edition, titled 'England's Artillerymen', this otherwise excellent book was laden with extraneous material which has been removed to create a new and well focused Leonaur edition to which illustrations have also been added.

Leonaur editions are newly typeset and are not facsimiles; each title is available in softcover and hardback with dustjacket.