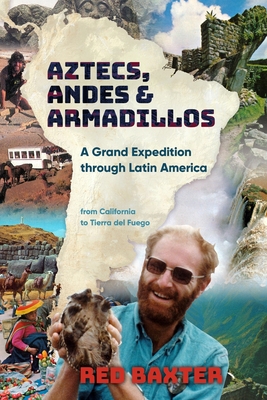 In 1980 escaping city life, Red Baxter joined an expedition by truck covering Latin America from California down to Cape Horn, and back up to the carnival at Rio. We met with harsh climates, heat, cold, and dust; also corrupt authorities, assaults, and maladies. The upside was forming enduring friendships, and enjoying remote locations, ruins, extreme peaks, deserts and lakes, glaciers, forests, and learning about the different local cultures. Best of all was the wildlife and the surprises each new day brought.
As the going got tougher I left the others behind and noticed for the first time I was actually treading a built granite path, the Inca Trail proper, in an acute state of disrepair due to the disturbances of frosts and roots and animal hooves during centuries of abandon. The trail was very crooked and stepped in places, following the contours of the mountain up to a high ledge, a position of natural advantage over all the valley.
While I climbed the irregular man-made stairway up the ledge, they advanced on round the mountain on their way to the second pass, but did not stop to study the Inca ruins along the way as I did. I sat on the ledge to wait for Frank and his newfound chum and looked around at the prolific and varied flowers. Thus it was I who made the discovery that the whole ledge was not natural at all but actually a built-up fortification such as a sentry-post overlooking the L- shaped valley.
Within sight of the guardhouse ledge, about half an hour higher up the valley, was Runkuraqay, an Inca waystation, with a door at the back opening into two concentric circular walls, between which were rooms ten feet wide and long. Here (as everywhere that people camp) was a lot of garbage, the one unpleasant feature of the hike. This ruin is at 12,500 feet and I explored it until Frank caught up.