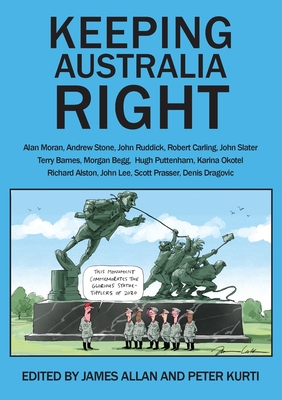 This book is the successor to 2016's Making Australia Right: Where to from Here? In this volume Keeping Australia Right, Alan Moran (our only holdover from the first book) considers energy policy; Andrew Stone tackles immigration; John Ruddick writes on reform of the Liberal Party itself; Robert Carling surveys economic policy; John Slater examines labour relations; Terry Barnes focuses on health policy; Morgan Begg delves into the thorny topic of constitutional recognition; next comes a chapter on gender dysphoria written under a pen name (for reasons of professional survival); Karina Okotel explores women in politics; Richard Alston examines the ABC and the media more generally; John Lee does the same with foreign policy; Scott Prasser takes on the public service; Denis Dragovic wades into religious freedom; and the last two chapters are those of your editors. James Allan on the theme of government bravery, in particular at its record when it comes to appointments. Peter Kurti goes more big picture and looks at whether this Morrison government can do what the title of this book posits, keep Australia right.