Into Africa: A Guide to Sub-Saharan Culture and Diversity (Paperback) 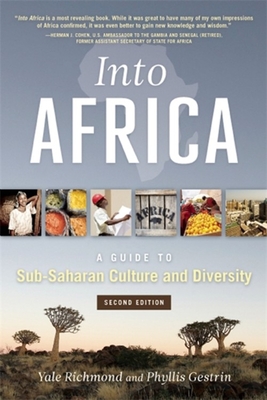 Into Africa: A Guide to Sub-Saharan Culture and Diversity (Paperback)


This title is likely unavailable. Email or call for price and availability.
"An invaluable source for anyone wanting to experience Africa. The authors begin with a subject of unimaginable scope and somehow make it concise and comprehensible ... a truly magnificent work for both scholar and novice." - Warren M. Robbins, Founding Director Emeritus, National Museum of African Art, Smithsonian InstitutionAcross the globe, Africa is seen as the final frontier for economic development and has experienced renewed attention from both Western and Eastern nations, particularly in the last decade. The U.S., India, China and parts of Europe have all increased foreign direct investment in Africa, and yet the complexity and diversity of this vast continent pose risks and challenges for those investments.

For more than a decade, Into Africa has provided valuable advice to those who are interested in traveling to, living in or working in sub-Saharan Africa - businesspeople, human rights and development workers, diplomats, academics and trainers - and anyone else who seeks a better understanding of the cultural characteristics of this dynamic part of the world.

With depth and sensitivity, Into Africa examines the effects of community, ethnicity and language on doing business and establishing professional and personal relationships in African countries. The book explores regional differences, offers detailed guidelines for conducting training programs in Africa and examines issues that reflect the complex relationships involved. This new and expanded edition of Into Africa brings a fresh view on sub-Saharan Africa, showing how the nations of Africa have adapted to Western ways while retaining their cultural traditions and diversity.

Authors Yale Richmond and Phyllis Gestrin explore contemporary Africa in great depth, discussing increased trade with the U.S. and Europe, the role of politics and business, changes in mass communication and the continuing threat of HIV/AIDS. A thorough, lively and carefully researched book, Into Africa is the perfect companion for anyone wishing to gain a more rounded perception of Africa and its diverse cultures.
Yale Richmond is a veteran of thirty years as a cultural officer in the US Foreign Service. Richmond is also the author of several books on intercultural communication including From Nyet to Da: Understanding the Russians and From Da to Yes: Understanding the East Europeans. Phyllis Gestrin has more than twenty years of experience in African affairs and spent 19 years as a senior technical adviser with USAID, including seven years in Somalia and Zaire.
An invaluable source for anyone wanting to experience Africa. The authors begin with a subject of unimaginable scope and somehow make it concise and comprehensible . . . a truly magnificent work for both scholar and novice.—Warren M. Robbins, Founding Director Emeritus, National Museum of Africa n Art, Smithsonian Institution

This book gives well-informed and up-to-date insight into the principal differences in customs, attitudes and values between "Westerners" and the peoples of Africa. It is a valuable contribution to better communications, capacity building and trade with a region offering huge economic potential for the 21st century.

Into Africa is a most revealing book. While it was great to have many of my own impressionsof Africa confirmed, it was even better to gain new knowledge and wisdom.—Herma n J. Cohen, U.S. Ambassador to the Gambia and Senega l (retired), former Assistant Secretary of State for Africa