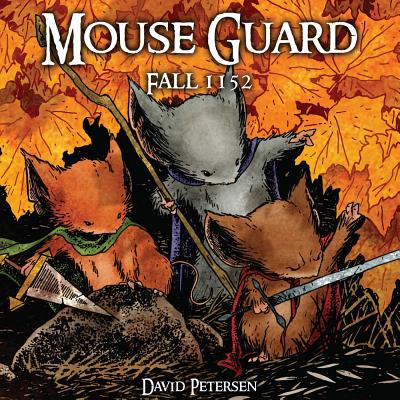 This is book number 1 in the Mouse Guard series.

In the world of Mouse Guard, mice struggle to live safely and prosper amongst harsh conditions and a host of predators. Thus the Mouse Guard was formed: more than just soldiers that fight off intruders, they are guides for common mice looking to journey without confrontation from one hidden village to another. The Guard patrol borders, find safeways and paths through dangerous territories and treacherous terrain, watch weather patterns, and keep the mouse territories free of predatory infestation. They do so with fearless dedication so that they might not just exist, but truly live. Saxon, Kenzie and Lieam, three such Guardsmice, are dispatched to find a missing merchant mouse that never arrived at his destination. Their search for the missing mouse reveals much more than they expect, as they stumble across a traitor in the Guard’s own ranks.
David Petersen was born in 1977. His artistic career soon followed. A steady diet of cartoons, comics and tree climbing fed his imagination and is what still inspires his work today. David was the 2007 Russ Manning Award recipient for Most Promising Newcomer, and in 2008 won Eisner Awards for Best Publication for Kids (Mouse Guard: Fall 1152 & Winter 1152) and Best Graphic Album – Reprint (Mouse Guard: Fall 1152 Hardcover). He received his BFA in Printmaking from Eastern Michigan University where he met his wife Julia. They continue to reside in Michigan with their dog Autumn