Meaning Is What Hides the Instability of One's Position (Paperback) 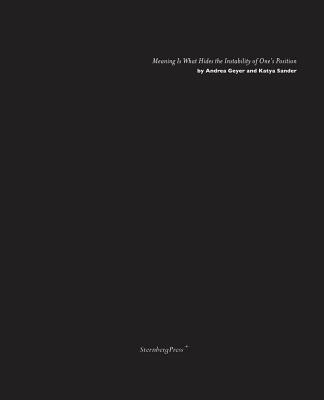 Meaning Is What Hides the Instability of One's Position (Paperback)

Andrea Geyer and Katya Sander's Meaning Is What Hides the Instability of One's Position is an artist's book; a photographic essay that takes us through spaces of international airports, or more specifically, the spaces of these airports that are classified as "transit areas," that is in between states and nations, although within them. Whereas a border is generally conceived of as a line between two territories, and not as a space in itself, the transit area is exactly such a space. In Geyer and Sander's passage through these areas, they investigate how these spaces, on the one hand, constitute and differentiate between territories, and on the other hand, spatialize the gap through a gestural, architectural, and linguistic vocabulary of hallways, doors, lines, checks, instructions, processes of identification, recognition, and namings that all lead to denied or granted passage. As the question of passage is central for the notion of a border, the book is conceived as a flip book: a number of still-images which, when flipped, gives the illusion of movement.

The book consists of twenty-two photographic sequences glimpsing fragments of movements and subjects through spaces of transit, overlaid and interwoven with 130 terms and fifty-seven sentences collected in various airports, classifying, sorting, and naming instances in spaces; a flow of images, meanings, politics, and bodies inscribed into them.