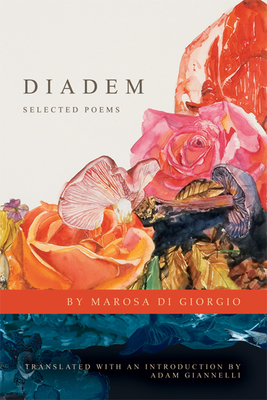 Marosa di Giorgio has one of the most distinct and recognizable voices in Latin American poetry. Her surreal and fable-like prose poems invite comparison to Franz Kafka, Julio Cort zar, or even contemporary American poets Russell Edson and Charles Simic. But di Giorgio's voice, imagery, and themes--childhood, the Uruguayan countryside, a perception of the sacred--are her own. Previously written off as the mad woman of Uruguayan letters, di Giorgio's reputation has blossomed in recent years. Translator Adam Giannelli's careful selection of poems spans the enormous output of di Giorgio's career to help further introduce English-language readers to this vibrant and original voice.

Marosa di Giorgio was born in Salto, Uruguay, in 1932. Her first book Poemas was published in 1953. Also a theater actress, she moved to Montevideo in 1978, where she lived until her death in 2004.

Since the publication of her first books in the mid-1950s, Marosa di Giorgio has introduced a seemingly indefinable element into Uruguayan literature. Angel Rama and Roberto Echavarren regard her as one of the most original and brilliant descendants of the Uruguayan-born Lautreamont. Other commentators portray her as an eccentric whose poetic prose is virtually synonymous with the idiosyncratic She is therefore a writer who has been praised but also marginalized insofar as she is repeatedly held up as the mad woman’ of contemporary Uruguayan letters because of a critical tendency to theorize negatively the very aspect of di Giorgio’s surrealist practices for which she has become most famous: her visionary escapism.”
KATHRYN A. KOPPLE, the Journal of Latin American Cultural Studies