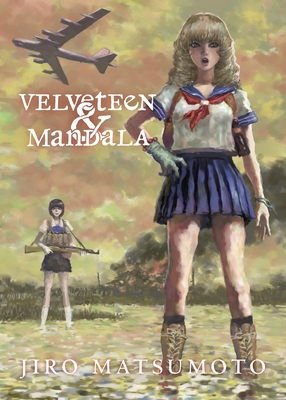 
Available in Warehouse. Wait for Email Confirmation for ETA
The world of Velveteen & Mandara is a dystopia. Tokyo where the youth used to waste their time search for answers, is now barren. For a pair of teens who still live along the outskirts of town, Velveteen and Mandala, Tokyo is a nightmare that can only compare to the nightmare that is slowly tring to take over the metropolis.

These two teens are the last line of defence for a nation in ruins. Armed with a fully-operational tank the pair must fight off the zombie hordes while they catfight each other for food, entertainment and maybe even the affection and attention of the opposite sex. They have nothing to lose in this world except their humanity, but then again who are the zombies in this world? Are they the undead or are these two teens who must live among them even still human?
Jiro Matsumoto was born on August 20, 1970. A graduate of the Mushashino College of the Arts with a major in sculpture art, Matsumoto quickly turned his focus on the comics world upon receiving his undergrad degree in 1992. That year he took the top honor in Kodansha's prestigous Morning/Chiba Tetsuya New Comic Artist Award. His debut work Little Field blew the judges away with its fast pacing and unhinged art-style.

While Matsumoto has penned numerous short-stories over the past two decades his first major success was the sci-fi thriller FREESIA. Published by Shogakukan's IKKI magazine since 2001, FREESIA would come to redefine indie comics in Japan when it was adapted into a live action film in 2006.

Velveteen & Mandara will be Matsumoto's first book in English.
“Velveteen & Mandala feels wrong in the best sense of the word. It’s a creepy, gross little monster of a book, the type that is going to crawl inside your brain and throw up on your frontal lobes… The strongest scenes come from the extreme cruelty that lurks behind high school life or the way that people—and I mean regular people here, like you and me—are casually insensitive to each other in deeply cutting ways… The exact manga you need if you’re a fan of Johnny Ryan’s Prison Pit, Charles Burns’s Black Hole, or seeing some good old-fashioned gross action.” —Comics Alliance

“Velveteen & Mandala is as disturbed as its protagonists, and maybe that’s because it manages to be both fun and sad… Just like the way Mandala obsessively shouts ‘Tape recorder!’ at the top of her lungs, Velveteen & Mandala will stay in your head and beg to be reread. Here’s hoping Vertical, or an equally gutsy publisher, pumps out more material like Matsumoto’s in the direction of an otherwise unsuspecting North American audience.” —Otaku USA

“It is funny, but in the black, ghastly way that something like Catch-22 or M*A*S*H (the original film, at its most embittered) was funny: you laugh, along with the storyteller, that you may not cry… The most significant development over the course of V&M is how it slowly trades the outré, non-sequitur black humor of its opening chapters for something a lot sadder and more expansive. There’s a surprising amount of emotional punch in the conclusion, enough that it invites a second reading of the book…” —Genji Press

"The key in appreciating this genius manga would be to just look deeper. The manga gives focus on how harsh life can be that people would be forced to sacrifice what they have. While this manga isn't recommended for teens, as it contains a lot of disturbing content, it definitely should be read." - Review Stream