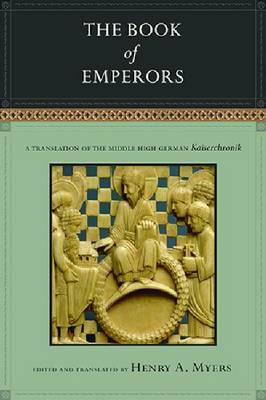 By Henry A. Myers (Editor)

The Kaiserchronik (c.1152–1165) is the first verse chronicle to have been written in a language other than Latin. This story recounts the exploits of the Roman, Byzantine, Carolingian, and Holy Roman kings and rulers, from the establishment of Rome to the start of the Second Crusade. As an early example of popular history, it was written for a non-monastic audience who would have preferred to read, or may only have been able to read, in German. As a rhymed chronicle, its combined use of the styles of language found within a vernacular epic and a factual treaty was a German innovation. The Book of Emperors is the first complete translation of the Kaiserchronik from Middle High German to English. It is a rich resource not only for medieval German scholars and students, but also for those working in early cultural studies. It brings together an understanding of the conception of kingship in the German Middle Ages, from the relationship between emperor and king, to the moral, theological, and legal foundations of claims and legitimacy and the medieval epistemological approaches to historiography. This translation includes a substantial introduction that discusses the historical and philological context of the work, as well as the themes of power and kingship. Each chapter begins with a brief introduction that distinguishes historical truths from the epic fiction found within the original text.

Henry A. Myers is Professor Emeritus of History at James Madison University.