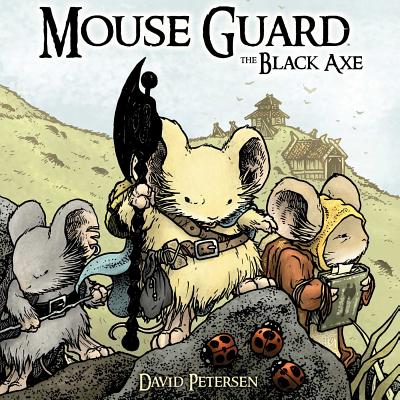 This is book number 3 in the Mouse Guard series.

Welcome back to the world of mice in the third collected volume of the Eisner Award-winning and critically acclaimed fantasy comic series, Mouse Guard. This beautifully illustrated prequel to the two previous volumes spins the tale of wise oldfur and longtime Mouse Guard member Celanawe, as he fulfills the promise made to young Lieam to detail the day his paw first touched the legendary weapon, the Black Axe. The arrival of distant kin takes Celanawe on an adventure that will carry him across the sea to uncharted waters and lands, all while unraveling the legend of Farrer, the blacksmith who forged the mythical weapon.
David Petersen was born in 1977. His artistic career soon followed. A steady diet of cartoons, comics and tree climbing fed his imagination and is what still inspires his work today. David was the 2007 Russ Manning Award recipient for Most Promising Newcomer, and in 2008 won Eisner Awards for Best Publication for Kids (Mouse Guard: Fall 1152 & Winter 1152) and Best Graphic Album – Reprint (Mouse Guard: Fall 1152 Hardcover). He received his BFA in Printmaking from Eastern Michigan University where he met his wife Julia. They continue to reside in Michigan with their dog Autumn