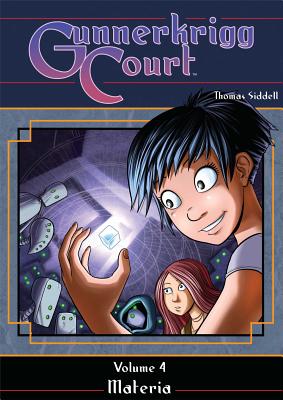 This is book number 4 in the Gunnerkrigg Court series.

The fourth volume in the ever-popular Gunnerkrigg Court series, based on Tom Siddell's hit webcomic! Annie returns from the forest and begins her third year at the Court. Her experience has left her changed, causing Kat to worry as they both struggle to find their place while their life changes around them. Together with their friends, they start to form a plan of action to deal with the tortured ghost they encountered the previous year, and in doing so, help Robot and Shadow form a new bond after a terrible accident. Annie continues to develop her powers and even takes part in a class full of former-fairies and animals, while Kat uncovers the mysteries of the ancient Court robots. Meanwhile, the search for the next Court Medium is drawing to a close, bringing with it new dangers and new revelations about the people Annie and Kat have met.
Thomas Siddell is English, and resides in Birmingham. He has a day job as an animator for a video game company, and he rides the bus to work every day. He hates Boxbot. He really, REALLY hates Boxbot.