Through the Woods: A Journey Through America's Forests (Paperback) 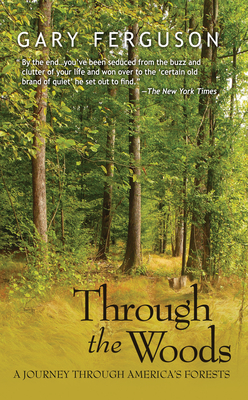 Through the Woods: A Journey Through America's Forests (Paperback)


This title is likely unavailable. Email or call for price and availability.
Through the Woods is a journey through the rich beauty of America's forests, sharing interviews with people whose lives are intertwined with America's woodlands. This edition includes a new introduction by Gary Ferguson, who reminds us that now, more than ever, kinship with the earth is essential. By the end, you may find you've been seduced from the buzz and clutter of your life and won over to the 'certain old brand of quiet' he set out to find."
--THE NEW YORK TIMES BOOK REVIEW Prose as inviting and uplifting as a walk in the woods.
--PUBLISHERS WEEKLY These woodland interludes are quick and bright, dazzling amid the bosky gloom. Writing so powerful that it's hard not to share the author's delight to be back in the woods.
--KIRKUS (starred review) Ferguson writes of woods and forest with fervor and reverence. This fierce devotion first learned in childhood colors the book's beautifully written prose, resulting in a lyrical ode to the individuals Ferguson encounters as he travels along the back roads of New England and the Midwest.
--BOOKLIST

Author Gary Ferguson has appeared on more than 200 television and radio programs across the country. His keynote addresses have been popular with a wide variety of conservation groups, including the Audubon Society, Sierra Club, The Wilderness Society, Save the Redwoods League, and the Land Trust Alliance. As a writer, Gary has worked for dozens of national publications--including Vanity Fair, the Los Angeles Times, and Outside Magazine--and is also the author of twenty-two books on nature and science. Hawks Rest: A Season in the Remote Heart of Yellowstone (National Geographic Press), was the first nonfiction work in history to win both the Pacific Northwest Booksellers Award and the Mountains and Plains Booksellers Award for Nonfiction. Decade of the Wolf (Globe-Pequot), as well as The Great Divide (W.W. Norton), were Audubon Magazine Editor's Choice selections. His latest book is a wilderness-based memoir titled The Carry Home (Counterpoint Press). Ferguson was the 2002 Seigle Scholar at Washington University, St. Louis, the 2007 William Kittredge Distinguished Writer at the University of Montana, and a visiting writer in the graduate writing program at the University of Idaho. He currently serves on the faculty of the Rainier Writing Workshop Masters of Fine Arts program, at Pacific Lutheran University. Gary lives with his wife, Mary, in Montana's Beartooth Mountains, as well as in Portland, Oregon.