Hawks Rest: A Season in the Remote Heart of Yellowstone (Paperback) 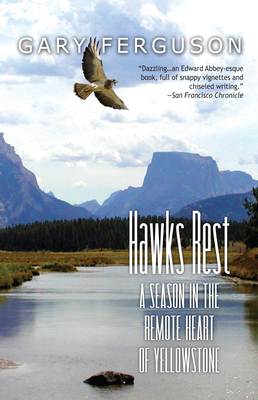 Hawks Rest: A Season in the Remote Heart of Yellowstone (Paperback)


This title is likely unavailable. Email or call for price and availability.
Among the many pleasures of re-reading Gary Ferguson's Hawks Rest, is finding the prose even more accomplished than remembered, the wit more agile, the observations more revelatory, its stance in the world proved once again so precisely wise. Hawks Rest is a book I will return to again and again.
--MARK SPRAGG, author of Where Rivers Change Direction and An Unfinished Life Gary Ferguson is one of the preeminent historians of the American West, and of the place and value of wilderness within that history. Hawk's Rest is an intense journal of the politics and ecology of one of America's wildest cores, in Yellowstone National Park. In many ways, this book is an important portrait of one of the foundations of our country's democracy, and of the struggles to hold on to that idea.
--RICK BASS, author of All the Land to Hold Us Hawks Rest is a long step toward a user's guide to wilderness, and a reverential and beautifully said hymn to the wild.
--TIM CAHILL, author of Hold the Enlightenment and Jaguars Ripped My Flesh A lyrical and often tough-minded evocation of a summer spent in the Yellowstone backcountry, a place that is, unexpectedly, full of larger-than-life characters, some of whom are admirable and some of whom are not."
--WILLIAM KITTREDGE, author of Hole in the Sky and The Nature of Generosity Dazzling...an Edward Abbey-esque book, full of snappy vignettes and chiseled writing.
--SAN FRANCISCO CHRONICLE A sharp and ironic sense of what it's like to live in the American outback, twenty-first-century style.
--NATURAL HISTORY MAGAZINE A well-written work...if you love Yellowstone, a great treat.
--DESERET NEWS Ferguson evoke(s) feelings of solitude, timelessness and aching beauty in the smallest details...
--THE OREGONIAN Mournful and defiant as a wolf howl...an eloquent tribute to a threatened place and its lone protectors.
--LOS ANGELES TIMES Hawks Rest brings the wonder, politics, and wildness of one of America's most vast and popular national parks to readers everywhere. With a new introduction by the author, this edition offers fresh insight into the condition of parks nationwide, while reintroducing readers to Ferguson's timeless tales and unique wisdom. Gary Ferguson is the author of twenty-two books including Through the Woods and, most recently, The Carry Home. He lives with his wife, Mary, in Montana's Beartooth Mountains, and in Portland, Oregon.

Author Gary Ferguson has appeared on more than 200 television and radio programs across the country. His keynote addresses have been popular with a wide variety of conservation groups, including the Audubon Society, Sierra Club, The Wilderness Society, Save the Redwoods League, and the Land Trust Alliance. As a writer, Gary has worked for dozens of national publications--including Vanity Fair, the Los Angeles Times, and Outside Magazine--and is also the author of twenty-two books on nature and science. Hawks Rest: A Season in the Remote Heart of Yellowstone (National Geographic Press), was the first nonfiction work in history to win both the Pacific Northwest Booksellers Award and the Mountains and Plains Booksellers Award for Nonfiction. Decade of the Wolf (Globe-Pequot), as well as The Great Divide (W.W. Norton), were Audubon Magazine Editor's Choice selections. His latest book is a wilderness-based memoir titled The Carry Home (Counterpoint Press). Ferguson was the 2002 Seigle Scholar at Washington University, St. Louis, the 2007 William Kittredge Distinguished Writer at the University of Montana, and a visiting writer in the graduate writing program at the University of Idaho. He currently serves on the faculty of the Rainier Writing Workshop Masters of Fine Arts program, at Pacific Lutheran University. Gary lives with his wife, Mary, in Montana's Beartooth Mountains, as well as in Portland, Oregon.