Who Killed the American Family? (Hardcover) 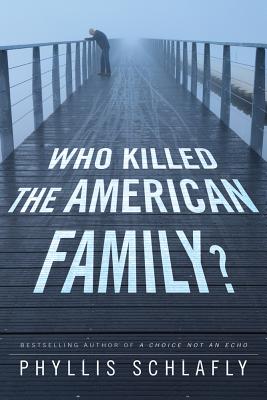 Who Killed the American Family? (Hardcover)


This title is likely unavailable. Email or call for price and availability.
American families are the backbone of this nation. The American family is the fundamental institution that provided the Founding Fathers with the emotional support and driving courage to face the tyrannical government that threatened their very existence. The American family used to be the fundamental institution of our stable, liberty-loving, and very successful society. It is the essential building block of a free society with limited government. In the last hundred years, the American family has been attacked, debased, maligned, slandered, and vilified by every facet of society. No family is safe from the official busybodies. At issue is a rebellion against any sort of moral code. Who Killed the American Family reveals the concerted assault on the American nuclear family by many forces - feminists, judges, lawmakers, psychologists, school districts, college professors, politicians offering incentives and seeking votes, and more - opposed to the traditional American nuclear family, each with its own raison d'etre for wanting to abolish it. The wreckage of the American family leaves us with the inability to have limited government because government steps in to perform tasks formerly done by the nuclear family. Veteran conservative activist and thought leader who lead the charge to successfully defeat the Equal Rights Amendment in the 1970s Phyllis Schlafly explains how changes in the law, in court decisions, in the culture, in education, and in entertainment have eroded the once-precious institution. Any one of these factors would not have been enough to impact our families, but together they added up to a mighty force. Schlafly not only exposes the tactical charge the Left has implemented, but she offers hope and a plan for stopping anti-marriage incentives and how to restore in our culture the sacred nature of the family unit.

Phyllis Schlafly is a national leader of the conservative movement since the publication of her best-selling 1964 book, A Choice Not An Echo. Author of 20 books, Schlafly has written a monthly newsletter since 1967 called The Phyllis Schlafly Report and a syndicated column, which appears in 100 newspapers. Her daily radio commentaries are heard daily on over 600 stations, and her radio talk show on education called Eagle Forum Live is heard weekly on 90 stations. She lived in St. Louis.

"Who Killed the American Family goes beyond the clichés of both sides to offer a clear and powerful analysis of the forces that are destroying the family and the consequences that are already ensuing. Mrs Schlafly confronts important issues that are ignored by most advocates for the family. The result is the most penetrating account yet of the civilizational implications of radical ideologies that are not only dismantling the family but doing so quite intentionally and methodically and destroying freedom in the process." — Stephen Baskerville, professor of government, Patrick Henry College and author of Taken Into Custody: The War Against Fathers, Marriage, and the Family

"With her characteristic courage and insight, the Iron Lady of the conservative movement indicts all those complicit in the forty-year war on the American family. Phyllis Schlafly exposes how feminists and globalists have worked in cahoots with the public school establishment, the welfare system, the divorce courts, the judges, and 'free trade' activists to deconstruct the very heart of American identity and exceptionalism." — Robert W. Patterson, opinion contributor, The Phildelphia Inquirer

"My friend, Phyllis Schlafly, has been a prominent figure in the conservative movement for decades. With courage and tenacity she has led the charge against liberal feminists who have been at war with traditional values and the nuclear family of this country. Who Killed the American Family clearly outlines the problems, exposes the players, and provides practical solutions for turning the tide in the culture war and reinstating the eminence of the American Family." — David Limbaugh, lawyer, syndicated columnist, and New York Times bestselling author

"Phyllis has represented an unwavering voice of reason about marriage, parenthood, the defense of righteousness, and conservative thought. I admire her greatly and thank God for the impact she continues to have on our nation." — James C. Dobson, Ph.D., president and founder of Family Talk