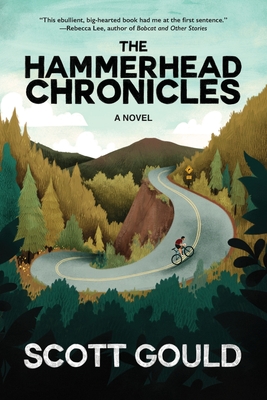 The latest novel from critically acclaimed Southern storyteller Scott Gould, The Hammerhead Chronicles explores the effects of grief, racism, homophobia, revenge, love, and loss on an oddball cast of contemporary characters in a small, fictitious South Carolina town . . . oh, and it's funny.

On the day Claude slaps down a credit card for an expensive racing bicycle, his soon-to-be-ex-wife passes away. As Claude begins a quest to pedal away from his marriage and his grief, we encounter the Southern eccentrics that orbit his world: his overly independent, rebellious teenage daughter; his foul-mouthed sister-in-law who deftly stalks her husband's mistress; twin, gay bookstore owners who serve the profitable underground Confederacy market out of their "special" back room; the math professor possessing an attic full of rats and a penchant for revenge; a skinny bartender-named for a Marine base-who preaches a suck-it-up philosophy; and Claude's recently deceased wife, observing it all from the Great Beyond, where she is annoyed by the lack of decent weather and by the troubled, tangled lives she left behind.

This ensemble of quirky, narrative voices dovetail for a fast-moving, comic story of longing and redemption, while flipping a number of Southern clich's on their ears.