A Sky Longing for Memories: The Art of Makoto Shinkai (Paperback) 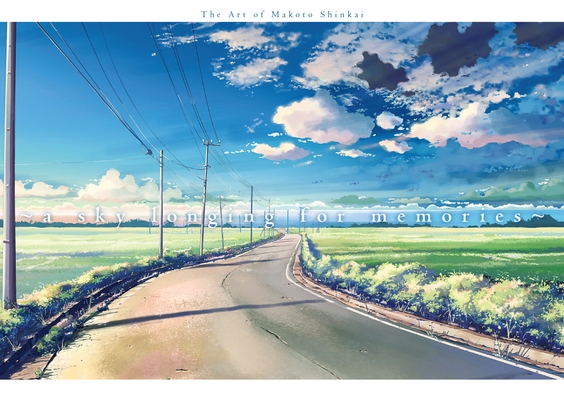 A Sky Longing for Memoriesis a Makoto Shinkai fan's dream! Featuring art created by the beloved director, this full-color art book is packed with art from the many movies he directed for Studio CoMix Wave. The book is a 175 page LANDSCAPE FORMAT softcover, the majority of which are images, a rare treat in the realm of fanbooks. Inside you will find hundreds of backgrounds from from his award-winning works: 5 Centimetres per Second, The Place Promised in Our Early Days, Voices of a Distant Star, and a TV advertisement for the Mainichi Newspaper.

In addition to the backgrounds, there is a section about the software and technique behind CoMix Wave's animation, which discuss the key features of the software the studio has developed to use at various stages of production. The English edition also comes with a lengthy interview with Mr Shinkai and other key members of his studio.

Makoto Shinkai is a Japanese film director, animator, and writer. A native of the Nagano prefecture in Japan, he studied Japanese literature at Chuo University. He traces his passion for creation to the manga, anime, and novels he was exposed to while in middle school. Considered one of the best animators in the world today, he is often called the "next-Miyazaki". Shinkai developed his abilities as a video game designer for FalCom, where he worked on the cult-classic role-playing game Y"S. Shinkai is unique as an animator as he cut his teeth by producing almost all elements many of his works - from animation to music composition to voice acting. He has won numerous awards: 12th DoGA CG Animation Award; 1st New Tokyo International Animation FestivalGrand Prize; 7th Kobe Animation Prize; 6th Japanese Media Art; Awardfor Digital Media; 34th Nebula Award(World Con); 59th Mainichi Films Animation Prize; 2007 Asia Pacific Film Award; and theLancia Platinum Grand Prize (Italy).

His film credits include: Voices of a Distant Star, The Place Promised in Our Early Days, 5 Centimeters Per Second, and Children who Chase Lost Voices from Deep Below