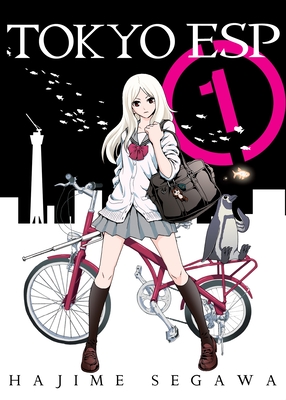 This is book number 1 in the Tokyo ESP series.

There’s a New Heroine in Town.

Rinka Urushiba’s world is turned upside down when she wakes up one day-after falling right through the floor.

Encouraged by another ESPer who believes that Rinka’s destiny is to become a hero of justice, she soon learns to use her powers for good. And not a moment too soon, as those with less-than-admirable ambitions descend on Tokyo with their own sets of superpowers. As the mysterious glowing fish flitting through the city skies gift powers seemingly at
random, foes become friends and alliances are made and broken.

And what about that flying penguin?
Hajime Segawa is a comic artist and character designer based out of Tokyo, Japan. He made is cartooning debut in the March 2005 issue of Kadokawa Publishing's Monthly Shonen ACE magazine with the short-story Phantom Kingdom (a comic adaptation of the PlayStation video game Makai Kingdom: Chronicles Of The Sacred Tome). By the end of the following year, Segawa was well onto developing his first feature length series GA-REI. GA-REI would continue for more than five years, spinning off a couple side-stories and eventually in 2008 a twelve episode animated TV series. Tokyo ESP is his second feature length series. Another hit in Japan, it was also recently adapted into a two season animated TV series. Segawa's works tend to involve the supernatural or psychic abilities, but are almost always set in modern day Tokyo with teenage leads.