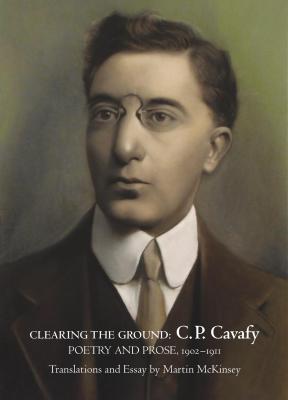 
This title is likely unavailable. Email or call for price and availability.
Clearing the Ground illuminates a crucial decade of Cavafy's artistic development, marked at one end by a period of personal crisis and near creative stasis, at the other by the poetic force of the celebrated "Ithaca." The years in between are held together by the "Unpublished Notes on Poetics and Ethics."

Part private confession, part public pronouncement, part journal entry, and philosophical pensée, these "Notes" were recorded between 1902 and 1911. In some of them, according to the eminent critic G. P. Savidis, Cavafy attempted to formulate "thoughts and feelings never before uttered" in his own language — in certain cases, in any language.

The full body of the notes is correlated in this volume with the poetry Cavafy was writing contemporaneously — in particular the startling "hidden poems" begun in 1904. What emerges is a striking narrative of artistic and personal becoming.

The afterward by Martin McKinsey examines Cavafy's sexuality and accompanying pressures in historical context and suggests the part they may have played in his poetic breakthrough.

This is a revelatory work for students and lovers of Cavafy — one of the great outsider poets of the twentieth century.
I scanned Cavafy availed by 15 pundits of translation and criticism; only now I begin to discern this poet to be a man as I would be, a man whose diversified fulfillments and consummations were to be held within one apprehension, the which, I now discern, he had achieved. Thank you, Martin McKinsey. Richard Howard

It strikes me as a must for anyone interested in modern poetry, queer studies, or (as I am most) how a poet discovers the courage and conviction to make a lasting mark in language. Joshua Weiner

[McKinsey's] technique of reporting the poet's jottings and then placing a relevant poem in the midst of those jottings brings Cavafy (not to mention the poem in question) alive in a way that, at least for me, has never happened before. Peter A. Bien

The notes put each poem in a new light. Thomas W. Laqueur