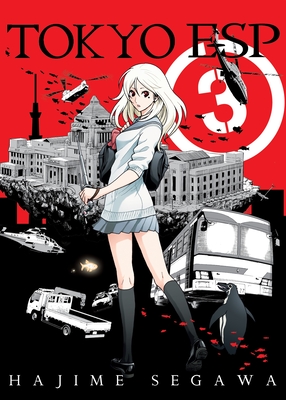 This is book number 3 in the Tokyo ESP series.

Rinka is targeted by The Professor’s minions at school, with life-threatening consequences. Azuma wakes up, alone, on a deserted island, too far to help anyone.

After we get a glimpse of The Professor’s past and the true nature of the stone that creates the glowing fish, the terrorist gang’s hijacking of the Diet building (by sending it flying through the skies) further enrages the government, which has already created a detention center for everyone with ESP.

The Professor’s ultimate act will have long-lasting repercussions, as the trap he set closes in on himself…
Hajime Segawa is a comic artist and character designer based out of Tokyo, Japan. He made is cartooning debut in the March 2005 issue of Kadokawa Publishing's Monthly Shonen ACE magazine with the short-story Phantom Kingdom (a comic adaptation of the PlayStation video game Makai Kingdom: Chronicles Of The Sacred Tome). By the end of the following year, Segawa was well onto developing his first feature length series GA-REI. GA-REI would continue for more than five years, spinning off a couple side-stories and eventually in 2008 a twelve episode animated TV series. Tokyo ESP is his second feature length series. Another hit in Japan, it was also recently adapted into a two season animated TV series. Segawa's works tend to involve the supernatural or psychic abilities, but are almost always set in modern day Tokyo with teenage leads.
“TOKYO ESP is full of promise. Love the foundation it’s laying and [...] it leaves with enough intrigue to be satisfied with the ending while itching for more, and soon.” —Kory Cerjak, Fandom Post