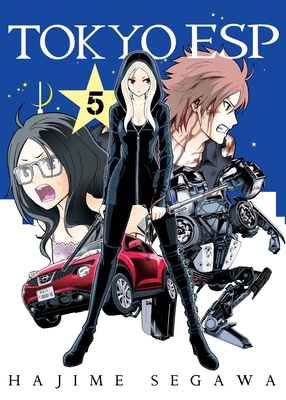 This is book number 5 in the Tokyo ESP series.

Rinka, who had gone missing, arrives back in Tokyo to put a stop to the plans of a terrorist organization that threatens Tokyo with a dangerous weapon, and rescue Ren and Marume from their evil clutches. But where had Rinka been that whole time? And what had she been doing? The truth is darker than the White Girl could have imagined...
Hajime Segawa is a comic artist and character designer based out of Tokyo, Japan. He made is cartooning debut in the March 2005 issue of Kadokawa Publishing's Monthly Shonen ACE magazine with the short-story Phantom Kingdom (a comic adaptation of the PlayStation video game Makai Kingdom: Chronicles Of The Sacred Tome). By the end of the following year, Segawa was well onto developing his first feature length series GA-REI. GA-REI would continue for more than five years, spinning off a couple side-stories and eventually in 2008 a twelve episode animated TV series. Tokyo ESP is his second feature length series. Another hit in Japan, it was also recently adapted into a two season animated TV series. Segawa's works tend to involve the supernatural or psychic abilities, but are almost always set in modern day Tokyo with teenage leads.
“An intense blend of furious fighting action, deep characterization, and mysterious psychic powers, Tokyo ESP is a “must-read” series for manga connoisseurs!” —Midwest Book Review