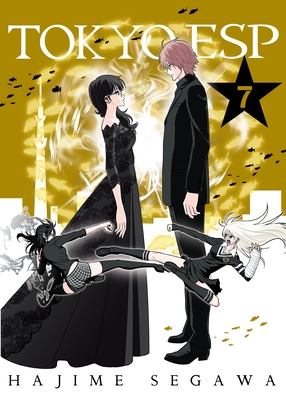 This is book number 7 in the Tokyo ESP series.

The Macabre Lady and the rest of the major players in Ares Security, a global PMSC, set their sights on Kozuki, who has squirreled away the Ark, and Ren, whose ESP is the key to unlocking the Ark itself. Rinka teams up with her old frenemy Kobushi (and even forms a tentative alliance with Minami) to take down Ares from the inside. And Murasaki’s ESP may turn out to be just the thing they need to win the battle, before the Messiah is reawakened...
Hajime Segawa is a comic artist and character designer based out of Tokyo, Japan. He made is cartooning debut in the March 2005 issue of Kadokawa Publishing's Monthly Shonen ACE magazine with the short-story Phantom Kingdom (a comic adaptation of the PlayStation video game Makai Kingdom: Chronicles Of The Sacred Tome). By the end of the following year, Segawa was well onto developing his first feature length series GA-REI. GA-REI would continue for more than five years, spinning off a couple side-stories and eventually in 2008 a twelve episode animated TV series. Tokyo ESP is his second feature length series. Another hit in Japan, it was also recently adapted into a two season animated TV series. Segawa's works tend to involve the supernatural or psychic abilities, but are almost always set in modern day Tokyo with teenage leads.
“Tokyo ESP is a fun journey, with the perfect blend of high school drama, romance, and coming of age moments we don’t think it will ever hit a point of stagnation.” —BentoByte