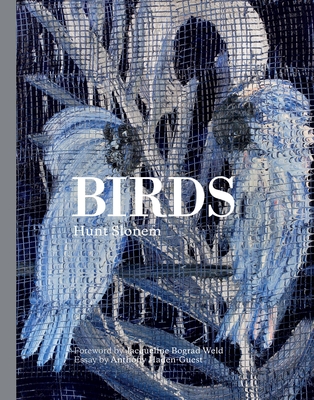 
Available in Warehouse. Wait for Email Confirmation for ETA
Influenced by the exotic, lush landscapes of his childhood years in Hawaii, Hunt Slonem's richly colored, impressionistic bird paintings are celebrated worldwide. For the first time, Slonem's birds are collected into a single, luxurious volume. In Birds, the Louisiana-born artist pays homage to these remarkable creatures through hundreds of engaging artworks. Dramatic and vivid, Slonem's avian subjects seem unconfined to a flat surface, brimming as they are with texture and movement. The compelling nature of these paintings lies in the tension between the birds' ability to soar and their often captive state (though Slonem's own birds are often spotted flying around his studio). The world-renowned artist's vibrantly patterned canvases are a celebration and a paean to birds, sure to entice returning fans and new viewers.
Hunt Slonem is an internationally recognized American painter, sculptor, and printmaker. His work has been exhibited in more than 350 galleries and museums worldwide, and is represented in the permanent collections of over 100 museums, including The Metropolitan Museum of Art. He lives in New York City and Louisiana, where he has notably restored two important plantations. Jacqueline Weld is the author of the novel Rara Avis and the biography Peggy: The Wayward Guggenheim. She is presently starring in a movie, based on her book, Peggy Guggenheim: Art Addict. Weld is also Chairman of the Board of Casita Maria, New York City's oldest settlement house for the Latino community. She lives in New York City. Anthony Haden-Guest is a writer, reporter, cartoonist and, unless forcibly prevented, performer. Recent books include True Colors: The Real Life of the Art World (Grove Atlantic) and The Last Party: Studio 54, Disco and the Culture of the Night (Morrow). He appears on paper and online and claims to be working on two books. He was born in Paris, grew up in London, and lives in New York City.