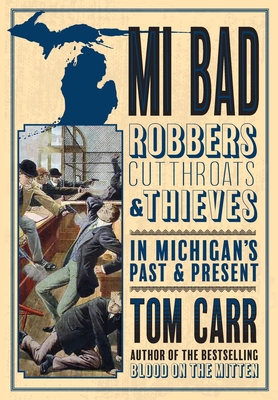 Train robberies, stage-coach holdups, posses, breakouts and shoot-em-ups step out of the darker pages of Michigan's past and spring to life in Tom Carr's MI Bad: Robbers, Cutthroats and Thieves in Michigan's Past and Present.

The Great Lakes State has seen more than its share of sensational crimes in the last couple of centuries. MI Bad shines a searchlight on several of the most jaw-dropping capers and rogues, including:

- A couple of 1880s prostitution procurers who roll drunken lumberjacks for their wages in a whorehouse and bury bodies in shallow graves. The two die drunk and destitute in a freezing shack.

- Baby Face Nelson gets his big-time career start -- with an actual baby -- in a bank holdup in Depression-era Grand Haven.

- A 1970s, cinema-esque escape from Jackson State Prison that falls apart quickly once outside the razor wire.

- Train robbing brothers who get away with fortunes all over the Midwest, until one of them puts a bullet in the head of a well-liked Grand Rapids cop.

- Huge posses of armed Michiganders rush out to help -- and sometimes hinder -- a bank stickup.

- A 19th Century U.P. boomtown finally has enough of a brothel owner beating the women he holds captive.

- Plus many more blood-and-money tales of Wolverine-state intrigue, suspense or just plain awfulness.