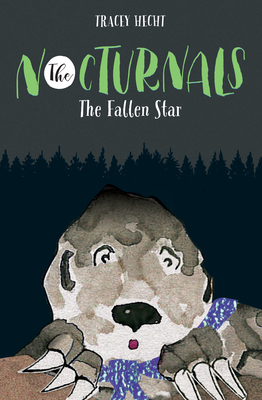 This is book number 3 in the The Nocturnals series.

“Returning fans will be rewarded” —Booklist

In The Nocturnals third chapter book, Dawn a serious fox, Tobin a sweet pangolin, and Bismark a pint-sized sugar glider, wake up to a disaster! A meteor has landed in the forest, blue lights glow near the crater, and animals are strangely affected. They meet Iris the aye-aye, a mysterious primate, who warns of a moon monster invasion. But can she be trusted? It is up to the Nocturnals to uncover the real explanation and save the animals!

READ ALL FOUR ADVENTURES WITH THE NOCTURNALS
The Nocturnals is a critically acclaimed middle grade chapter book series following three unlikely friends—Dawn, a serious fox, Tobin, a sweet pangolin, and Bismark, a pint-sized sugar glider. Discover the friendships, teamwork, and humor as the Nocturnal Brigade solves the unpredictable mysteries of the night.

In the fourth chapter book, The Hidden Kingdom, Dawn, Tobin, and Bismark travel to a distant watering hole and strange things happen along the way. The ground crumbles, water disappears, and huge tumbleweeds chase after them! Is the forest alive? When the animals start hearing voices, they begin to wonder: are they imagining things or is something, or someone, else responsible? Only the Nocturnals can solve this mystery and unite the forest!
Tracey Hecht is a writer and entrepreneur who created The Nocturnals, the critically acclaimed middle grade and early reader series. The American Booksellers Association chose her first book, The Nocturnals: The Mysterious Abductions, as a Kids’ Indie Next List pick. In addition, her Grow & Read early reader book, The Chestnut Challenge, was given a Mom’s Choice Gold Award. With the New York Public Library, she has also created a Read Aloud Writing Program that has since been conducted in hundreds of schools, libraries, and bookstores. Other books in the Nocturnals middle grade series include The Ominous Eye, The Fallen Star, and The Hidden Kingdom. Tracey currently splits her time between New York City and Oquossoc, Maine, with her husband and four children.

Kate Liebman is an artist who lives and works in New York City. She graduated from Yale University and has an MFA from Columbia University. Kate contributes to the Brooklyn Rail, and has shown her work at multiple galleries. She grew up in Santa Monica, California.
“Action abounds, and almost all of the short chapters end on cliff-hangers. Once again, the trio’s mutual loyalty and dependence on each other’s unique talents—be they what they are—save the day. This is a worthy addition to the franchise.”
— Booklist

“Featuring spirited animal characters who deal with real-life scenarios in a relatable way...the books celebrate the very meaningful idea of friendship and what it means to forge positive relationships.”
— Amy Poehler's Smart Girls

“The series addresses bullying and empathy in an easy, accessible way, and the books are meant to be read aloud.
— New York Post

“The Nocturnals is an enchanting story about a group of animals who band together to protect their friends and find adventure. The characters are delightful and the nighttime landscape is captivating. It was just as I expected–because the best stories always take place in the dark!”
— R.L. Stine, Author of Goosebumps

“Hecht serves up both a curious adventure and interesting zoological facts in this volume. Her descriptions of flora, fauna, and natural phenomena are vivid and immediate…Fresh and fun: the brigade delights as it explores another forest mystery.”
— Kirkus Reviews

“Hecht knows her audience and has written a well-paced story with short chapters that keep readers hanging on to the end.”
— Deseret News, Salt Lake City, UT