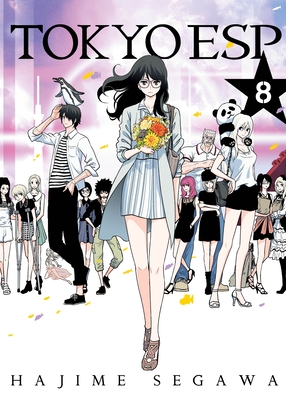 This is book number 8 in the Tokyo ESP series.

Once the board members of Ares have gathered, Claudia uses Touko to awaken the Messiah and receive its benediction—a massive magnification of her ESP—just as Rinka, Kobushi, Minami and Nadja storm in, setting off the biggest ESP battle in Tokyo’s history. Then an old enemy shows up, and alliances are strained as allegiances are tested. Can Rinka and her friends take down the power-drunk Claudia before Tokyo is wiped off the map...?
Hajime Segawa is a comic artist and character designer based out of Tokyo, Japan. He made is cartooning debut in the March 2005 issue of Kadokawa Publishing's Monthly Shonen ACE magazine with the short-story Phantom Kingdom (a comic adaptation of the PlayStation video game Makai Kingdom: Chronicles Of The Sacred Tome). By the end of the following year, Segawa was well onto developing his first feature length series GA-REI. GA-REI would continue for more than five years, spinning off a couple side-stories and eventually in 2008 a twelve episode animated TV series. Tokyo ESP is his second feature length series. Another hit in Japan, it was also recently adapted into a two season animated TV series. Segawa's works tend to involve the supernatural or psychic abilities, but are almost always set in modern day Tokyo with teenage leads.
“Tokyo ESP is a fun journey, with the perfect blend of high school drama, romance, and coming of age moments we don’t think it will ever hit a point of stagnation.” —BentoByte

“An engrossing supernatural story, Tokyo ESP is better thought of as an homage to American superhero comics – and let’s face it, they’re in high fashion right now. With great action, comedy and plenty of drama, Tokyo ESP is an intriguing series, and one to definitely pick up.” —NEO Magazine (UK)