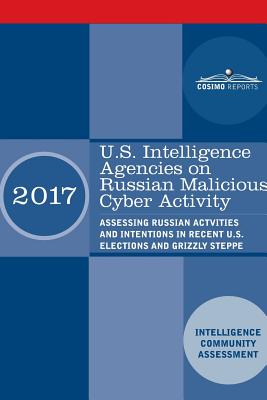 As the election results of the 2016 U.S. Presidential Elections still reverberate in the U.S. and throughout the world, the discussion on how Donald Trump won and whether Russian influence helped his win continues. Leaked conspiracy theories which would have fitted well in a John le Carr spy novel seem corroborated by U.S. intelligence reports. In this volume, you find declassified versions of two reports by the U.S. intelligence agencies released at the end of 2016 and at the beginning of 2017.

The first report, Assessing Russian Activities and Intentions in Recent U.S. Elections, describes Russia's activities in the media, social media, and cyberspace during the latest and previous U.S. elections. In this report, the U.S. Intelligence Community confirms "...Moscow's longstanding desire to undermine the US-led liberal democratic order...." Also, they state that this campaign had a clear preference for Donald Trump to win. This report concludes ominously that Moscow will apply lessons from this campaign to influence other elections worldwide.

The second report, GRIZZLY STEPPE- Russian Malicious Cyber Activity, shows how two groups, part of the Russian Intelligence Services, hacked into an-unnamed-U.S. political party. Furthermore, it offers technical advice and suggestions to organizations on how they could protect themselves against cyberattacks.

Although it might take some time before we really understand the impact on the 2016 elections, these two brief reports are fascinating reading for political observers, journalists, and readers concerned about what really happened in 2016.