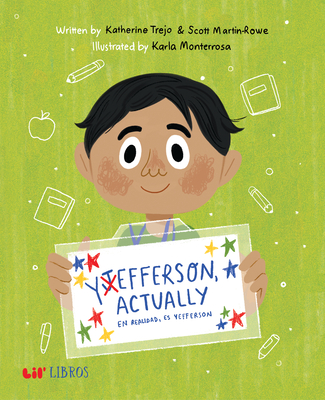 On his first day as the new kid in school, shy Yefferson's name is consistently mispronounced to his discomfort and embarrassment. With his family's support, Yefferson finds the courage to stand up for himself and his namesake.

Yefferson, Actually is wonderful new picture book to embrace in the pantheon of classic Back to School stories. Follow sweet and unassuming Yefferson - proudly pronounced with the sound the Y makes in Spanish, not the J in English - as learns to overcome what is a common, but often undiscussed hurdle for all shy kids entering a new school year: correctly teaching people how to say your name correctly.

In a picture book market that too often doesn't highlight Latinx boys as the main characters of their own stories, Yefferson stands up and stands out for his kindness, gentleness, and strength when he treats others how he wants to be treated. Perfect for lovers of King of Kindergarten and Alma and How She Got Her Name, Yefferson, Actually is the debut picture book for both authors and the illustrator, and the first book in a new series centered on Yefferson and his friends' adventures.

This back-to-school book is the perfect addition for your little one's at-home library, as it will motivate them to stand up for themselves and realize that their familial roots came from growing seeds of pride and history.

Katherine Trejo is a first-generation Salvadoran-American college graduate with a bachelor's degree in politics and Latin American/Latino studies from UC Santa Cruz. She lives in Historic Filipinotown with her Boston Terrier Lily, mom, brother, cousins, aunts, grandma, niece, and nephew in the same apartment complex where she was raised. She enjoys spending time with friends and family, watching cartoons, and listening to K-pop. She co-authored this book with Mr. Scott Martin-Rowe, one of her most influential and favorite teachers in high school.Scott Martin-Rowe is a National Board Certified teacher-librarian in the Los Angeles Unified School District and the first in his family to graduate from college. Aside from teaching, he enjoys reading, writing, running, and spending time with his family and friends. He lives in Los Angeles with his wife, writer Kate Martin Rowe, his four energetic children, one lazy dog, and an opinionated cat.Karla Monterrosa was born and raised in sunny San Salvador, El Salvador. She's an illustrator and animator on a mission to draw a world in which it's okay to feel awkward. Karla graduated from Emily Carr University of Art + Design with a BFA in Animation in 2013 and currently lives in the unceded, ancestral lands of the Musqueam, Squamish, and Thleil-Watuth nations also known as Vancouver, BC.