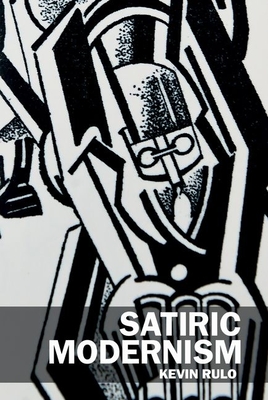 
This title is likely unavailable. Email or call for price and availability.
In this book, Kevin Rulo reveals the crucial linkages between satire and modernism. He shows how satire enables modernist authors to evaluate modernity critically and to explore their ambivalence about the modern. Through provocative new readings of familiar texts and the introduction of
largely unknown works, Satiric Modernism exposes a larger satiric mentality at work in well-known authors like T.S. Eliot, James Joyce, Wyndham Lewis, Ezra Pound, Virginia Woolf, and Ralph Ellison and in less studied figures like G.S. Street, the Sitwells, J.J. Adams, and Herbert Read, as well as in
the literature of migration of Sam Selvon and John Agard, in the films of Paolo Sorrentino, and in the drama of Sarah Kane. In so doing, Rulo remaps the last hundred years as an era marked distinctively by a new kind of satiric critique of and aesthetic engagement with the temporal fissures, logics,
and regimes of modernity. This ambitious, expansive study reshapes our understanding of modernist literary history and will be of interest to scholars of twentieth century and contemporary literature as well as of satire.
Kevin Rulo is a Clinical Assistant Professor in the English Department at the Catholic University of America. His current research focuses on the relationship between modernism, modernity, and satire. His initial work in this area has appeared in essays on Wyndham Lewis's abandoned early-20s bookJoint in the Review of English Studies, on modernity and the Men of 1914 in Neohelicon, and on Eliot's satirical verse in The T.S. Eliot Studies Annual. He is currently at work on a paper that explores the poetry of Alan Seeger and its relationship to the quatrain poems of T.S. Eliot.