Among Elms, in Ambush (Paperback) 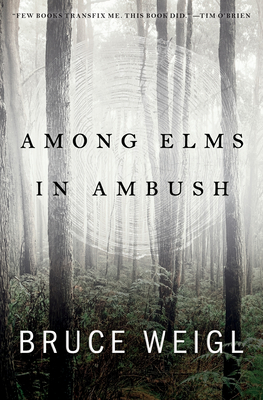 Among Elms, in Ambush (Paperback)

This powerful new work by Bruce Weigl follows the celebrated poet and Vietnam War Veteran as he explores combat, survival, and PTSD in brief prose vignettes.

In compact, transcendent, and poetic prose, Bruce Weigl chronicles somber observations on the present day alongside painful memories of the war. Reflections on school shootings and the lightning-fast spread of news in the 21st century are set alongside elegies for forgotten soldiers and the lifelong struggle of waiting for the trauma of war to fade. Haunting and nuanced, Among Elms, in Ambush carries readers through mediations and medications, past the shapes of figures in the dark rice fields of Viet Nam and the milkweed pods in the frost-covered fields of Ohio, toward a hard-won determination to survive.

Bruce Weigl is the author of author of over twenty books of poetry, translations and essays, most recently On the Shores of Welcome Home (BOA, 2019) and The Abundance of Nothing (Northwestern University Press, 2012), which was a finalist for the 2013 Pulitzer Prize in Poetry. He has won the Lannan Literary Award for Poetry, the Robert Creeley Award, The Cleveland Arts Prize, The Tu Do Chien Kien Award from the Vietnam Veterans Against the War, fellowships at Breadloaf and Yaddo, and a grant from the National Endowment for the Arts. In 2018, he was awarded the "Premiul Tudor Arghezi Prize" from the National Museum of Literature of Romania. Weigl's poetry, essays, articles, reviews and translations have appeared in The Nation, The New Yorker, The Paris Review, Harvard Review, Harpers, and elsewhere. His poetry has been translated into Romanian, Spanish, Vietnamese, Chinese, Bulgarian, Japanese, Korean and Serbian. He lives in Oberlin, OH, and in Ha Noi Viet Nam.