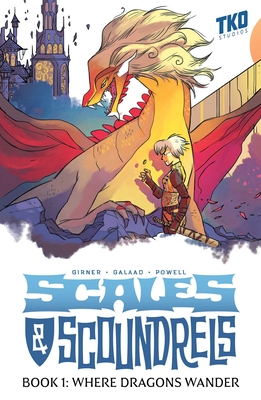 This is the story of a girl who liked to wander...

It's hard to make an honest living in a land brimming with magic and mystery, and treasure hunter Luvander is tired of being a penniless adventurer. Ever in search of gold and glory, she sets off for a fabled dungeon "the Dragon's Maw", an ancient labyrinth, at the bottom of which slumber endless wealth...or certain doom

A loner by trade, Luvander is forced to team up with a team of scraggly adventurers, each hoping to find a treasure of their own in the forbidden tomb. There is Prince Aki, of the Scarlet Sands Empire, anxious for first taste of adventure yet blind to the consequences. His royal Shadow and bodyguard, Koro, whose very honor hangs in the balance of her prince's success. And Dorma Iron, a stocky young dwarf whose journey will take her deeper into the darkness than she ever wished to tread.

For these scruffy heroes, what starts out as a road to riches becomes the first step on an epic journey to destiny, for Luvander holds a secret in her heart that will shatter the chains of fate, and bring light to a world encroached upon by an ancient darkness.

Scales & Scoundrels: Where Dragons Wander includes all previously collected issues in this Definitive Edition, plus 250+ pages of new material.

The Festival of Life - Book 2 continues the adventure as Luvander sets off to find a way to break the chains of her cursed fate. Undeterred by danger, she travels to the frozen northern wastes of the Spine of Winter, to a reclusive monastery whose monks guard a secret entrance to the Dragon Dream, the shared plane of consciousness of all Urden, living or long passed. What she finds there will set her on a journey beyond where any mortals, and few dragons have tread, to uncover an ancient secret from the darkest corners of history. Continuing the epic journey of the cursed dragon princess and her fellow scoundrels in a world bent on undoing itself.


Sebastian Girner is a German-born, American-raised editor and writer. As editor he has worked for publications including Marvel Entertainment, Image Comics, VIZ Media, Kodansha, Random House, and Wizards of the Coast. His writing work includes the all-ages fantasy Scales & Scoundrels, the tall-tale action/satire Shirtless Bear-Fighter!, and the dark fantasy samurai thriller The Devil's Red Bride. Since its inception in 2018 Sebastian has served as Editor-in-Chief of TKO Studios. He lives and works in Brooklyn. Jeff Powell is a graphic designer, letterer and illustrator who traded a life in the Big Apple for one in the Big Easy. A veteran of the comic book industry, Jeff has been lettering and designing books for over twenty-five years. In addition to two in-house roles at Marvel, his portfolio includes work from a variety of publishers including Archie, Image, IDW, and more. He lives and works in New Orleans.