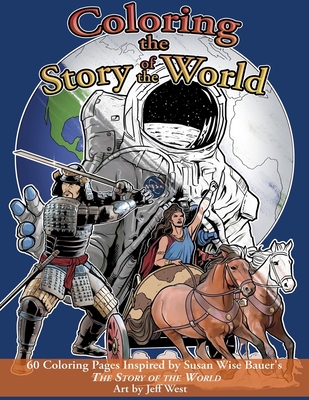 Susan Wise Bauer’s narrative history series has sold over 1.5 million copies and is a staple of homes and schools worldwide. Coloring the Story of the World gives children a new way to experience the thrilling drama of human history.

Featuring historical figures from the Celtic warrior queen Boadicea to the brave firefighters of Chernobyl, and dramatic settings from the Roman Colosseum to the jungles of Haiti to the surface of the moon, this coloring book combines 30 brand-new coloring pages with 30 classic ones from the bestselling Story of the World Activity Books. Engaging descriptions of each coloring page give the historical context for Jeff West’s beautiful artwork. With the exciting moments and accurate detail that made The Story of the World so popular, Coloring the Story of the World is the perfect combination of fun and exploration for young readers & artists.

Susan Wise Bauer is a writer, educator, and historian. Her previous books include the Writing With Ease, Writing With Skill, and Story of the World series from Well-Trained Mind Press, as well as The Well-Trained Mind: A Guide to Classical Education at Home, The Well-Educated Mind: A Guide to the Classical Education You Never Had, Rethinking School, The Story of Western Science: From the Writings of Aristotle to the Big Bang Theory, and the History of the World series, all from W. W. W. Norton. She has a Ph.D. in American Studies from the College of William & Mary in Virginia, as well as an M.A. in seventeenth-century literature and a Master of Divinity in Ancient Near Eastern Languages and Literature. For fifteen years, she taught literature and composition at the College of William and Mary.

Justin Moore has taught English and history to elementary and high school students, and currently works as an editor and researcher at Well-Trained Mind Press and its Olive Branch Books. He has degrees in history and theology from the College of William & Mary and Westminster Theological Seminary. He and his wife Melissa live in Charles City, Virginia with their dog, Pippin.

Jeff West is an established illustrator and his variety and bulk of work is expansive, ranging from traditional art to art for TV and movies. He recently earned himself an Emmy nomination and has worked on blockbuster shows and films. He resides in Arizona.