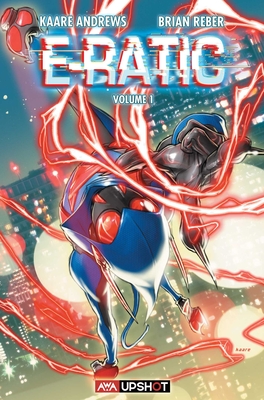 
This title is likely unavailable. Email or call for price and availability.
You’re fifteen years old. You’re suddenly granted incredible powers. Cool, right? There’s only one problem: you can only use your powers for ten minutes at a time. What do you do when you have to save the world but you only have ten minutes to do it?  This is the problem faced by Oliver Leif, a teenager who has just moved to a new town, and a new school, and is having a hard enough time navigating classes and his crush before the inter-dimensional monsters started showing up.
Kaare (rhymes with Atari) is the only director in the world working simultaneously in comics, film and TV.

His film, SNIPER: ASSASSIN’S END was released in summer of 2020 for Sony and hit #1 on iTunes. Some of his TV credits include V WARS for Netflix, VAN HELSING, AFTERMATH for SyFy, the live action pilot SIBLINGS for Cartoon Network, and MECH X-4 for Disney. Kaare has been featured in Vice, USA Today and Hollywood Reporter.

"Kaare Andrews does an exceptional job in E-RATIC #1 of setting out and establishing the various characters and relationships as well as sign posting future problems coming Ollie's way too. All delivered with humour and great art."
— Olly MacNamee

“E-RATIC seems to be setting up one jam-packed series.”
— Carlos R.

“The script by Kaare Andrews, is very entertaining, and has potential, but it will need to take a little more time to world-build. ”
— Lucas Fashina