Does it Still Matter?: Essays in Honor of the Conservative Resurgence (Hardcover) 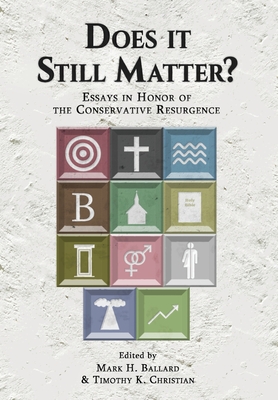 Does it Still Matter?: Essays in Honor of the Conservative Resurgence (Hardcover)

From the election of Rogers, through the Peace Committee report in 1987, the quake's shockwaves rumbled to their peak intensity twenty-one years later. In 2000 the SBC overwhelmingly voted to approve a newly revised Baptist Faith and Message. Chief among its clarifications was the confession's clear affirmation of the Bible as Divinely inspired and fully infallible, inerrant, and authoritative.

For those who celebrated the revised Baptist Faith and Message's clear doctrinal affirmations, and the consequent transformation of all SBC agencies, entities, and educational institutions, the Conservative Resurgence mattered. They believed it was worth their prayers and sacrifices, time and energy to "... turn America's largest Protestant church family away from its liberal drift."

But times have changed. Now, a hot-button issue can grip the nation one day and be forgotten within the next 24-hour news cycle-ancient history; time to move on. In such a fast-paced age, do the doctrinal issues that sparked a movement four decades ago still matter today? If so, why?