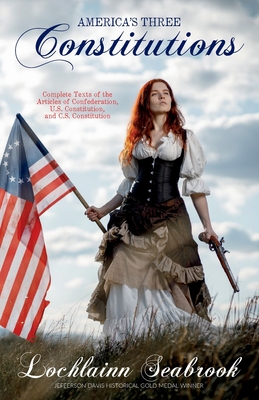 It is a rarity to find a book that includes the unaltered original texts of all three of America's most conservative documents. It is even more difficult to find one compiled by a political Conservative Award-winning historian Lochlainn Seabrook has permanently solved this problem with his little volume America's Three Constitutions: Complete Texts of the Articles of Confederation, U.S. Constitution, and C.S. Constitution. In addition to these three important charters, Mr. Seabrook also provides numerous supplemental conservative documents that are seldom recognized or discussed today; critical early writings that helped forge the spectacular country that George Washington called a "confederate republic" The United States of America.

While leaving the original 18th- and 19th-Century texts intact and unedited, Mr. Seabrook provides historical bullet points for each document which supply background and context to the creation and development of both the United States of America and the Confederate States of America. The author-editor also includes an introduction, index, appendices, endnotes, and a bibliography. If you are interested in our true constitutional history, you will want a copy of this handy volume that puts a dozen indispensable early American documents at one's fingertips. America's Three Constitutions is available in paperback and hardcover. (All text copyright (c) Sea Raven Press)

Award-winning historian Lochlainn Seabrook is the author and editor of (currently) 75 books, including: Abraham Lincoln Was a Liberal, Jefferson Davis Was a Conservative; Lincoln's War: The Real Cause, the Real Winner, the Real Loser; The Unholy Crusade: Lincoln's Legacy of Destruction in the American South; Heroes of the Southern Confederacy: The Illustrated Book of Confederate Officials, Soldiers, and Civilians; What the Confederate Flag Means to Me; The Great Yankee Coverup: What the North Doesn't Want You to Know About Lincoln's War; Confederacy 101: Amazing Facts You Never Knew About America's Oldest Political Tradition; Confederate Flag Facts: What Every American Should Know About Dixie's Southern Cross; Support Your Local Confederate: Wit and Humor in the Southern Confederacy; Women in Gray: A Tribute to the Ladies Who Supported the Southern Confederacy; Everything You Were Taught About American Slavery is Wrong, Ask a Southerner ; Honest Jeff and Dishonest Abe: A Southern Children's Guide to the Civil War; The Constitution of the Confederate States of America Explained; and A Rebel Born: A Defense of Nathan Bedford Forrest.