From Survivor to Surgeon: A Refugee's Memoir of Perseverance and Purpose (Paperback) 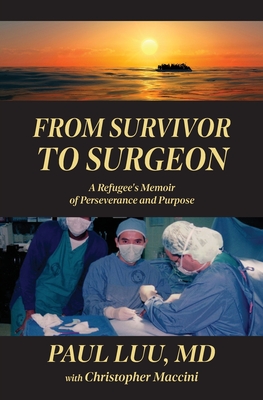 From Survivor to Surgeon: A Refugee's Memoir of Perseverance and Purpose (Paperback)

In the aftermath of the Vietnam War, Paul Luu's life was thrown into chaos. At just sixteen years old, he left his home in Saigon with his belongings packed into a single duffel bag. Separated from his family, he became one of hundreds of thousands of "boat people" fleeing communist rule, political instability, and poverty.

After enduring days at sea in an overcrowded boat and months stranded on a remote island, Paul was finally resettled in the United States, but his ordeal was far from over. He struggled to learn English while navigating the complexities and cruelties of the foster care system. Convinced that knowledge was the path to a better life, Paul pursued his education with single-minded focus. He earned a GED, attended college and medical school, and undertook years of training to become a surgeon. Through it all, Paul survived, driven by hard work, an unshakable sense of hope, lots of luck, and help from caring individuals and mentors.

From Survivor to Surgeon tells Paul's inspiring story of perseverance, purpose, and hope.