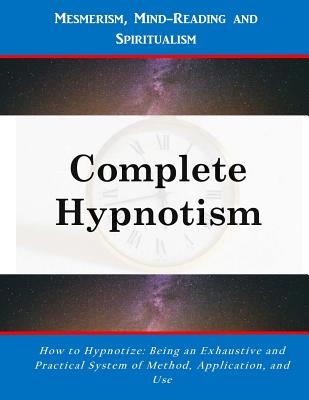 How to Hypnotize: Being an Exhaustive and Practical System of Method, Application, and Use

Hypnosis is a state of human consciousness involving focused attention and reduced peripheral awareness and an enhanced capacity to respond to suggestion. The term may also refer to an art, skill, or act of inducing hypnosis.

We have seen that so far the history of hypnotism has given us two manifestations, or methods, that of passes and playing upon the imagination in various ways, used by Mesmer, and that of physical means, such as looking at a bright object, used by Braid. Both of these methods are still in use, and though hundreds of scientific men, including many physicians, have studied the subject for years, no essentially new principle has been discovered, though the details of hypnotic operation have been thoroughly classified and many minor elements of interest have been developed.

There is no doubt that hypnotism is a very old subject, though the name was not invented till 1850. In it was wrapped up the "mysteries of Isis" in Egypt thousands of years ago, and probably it was one of the weapons, if not the chief instrument of operation, of the magi mentioned in the Bible and of the "wise men" of Babylon and Egypt. "Laying on of hands" must have been a form of mesmerism, and Greek oracles of Delphi and other places seem to have been delivered by priests or priestesses who went into trances of self-induced hypnotism. It is suspected that the fakirs of India who make trees grow from dry twigs in a few minutes, or transform a rod into a serpent (as Aaron did in Bible history), operate by some form of hypnotism.