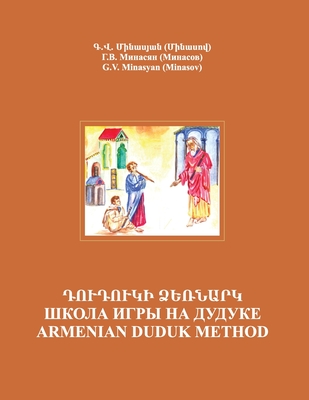 The Third Edition of Armenian Duduk Method is the only trilingual comprehensive and easy-to-use guide designed for anyone interested in playing Armenian Duduk from the complete novice just learning the basics to the more advanced player. Using his prominent performance and pedagogy background Georgy Minasov takes an all-in-one approach by combining theory, scales and technique into a single volume. For those who want to enrich their repertoire the book features over 250 songs from different music genres including such duduk standards as Hovern Enkan, Machkal, Eshkhemet and much more.

The book is divided into four sections. The first section aims to teach the beginners to perform smoothly and correctly read the notes. Section II fixes and further builds on the skills gained in Section I, adding competence of correct performance of folk and gussan songs, dance melodies, and spiritual music. Sections III and IV include ensembles and mughams - the pearls of Eastern culture along with their audio tracks accessible online.

More information about the book can be found by accessing book's official website at www.minasovduduk.com

Georgy Minasyan (Minasov) (born July 18, 1933) is a Armenian duduk master, inventor, teacher, music educator, and founder of Dudukner Ensemble in Yerevan, Armenia. He graduated from Baku Musical College where he performed with Follk Instruments Orchesta of Azerbaijan State Radio and Television as a solo performer. In 1983 he moved to Yerevan Armenia and joined the Gussan and Folk Music Ensemble. Georgy Minasov currently teaches duduk at the R. Melikyan Music College in Yerevan and performs locally and internationally throughout the world. In 1998 Georgy Minasov founded The Dudukner Ensemble that has been performing internationally for almost two decades. They have performed and scored music in award winning films, including the 2004 documentary entitled, 'Eternal Hour' (a film about Narekatzy), the 2005 Kiev International Film Festival First prize winner, 'In the Open Air', and won first place during the 'Golden Apricot' film festival in Yerevan, Armenia. In addition to numerous scoring for international films, they gained high praise for the film, "Long Way Home' featuring Isabel Bayrakdarian for their outstanding arrangements of three folk songs by Komitas. Besides being a masterful performer, Georgy Minasyan is also an experienced teacher, an inventor and a tireless investigator of the instrument. His patented modifications include adding a system of metal levers to traditional duduk to essentially increase instrument's range and significantly enlarge its repertoire beyond traditional folk tunes. His "Armenian Duduk Method" is a result of many years in the performing and teaching experiences of Georgy Minasov, in whose "artistic laboratory" because of his inquisitive mind he never stops, not even for one minute.