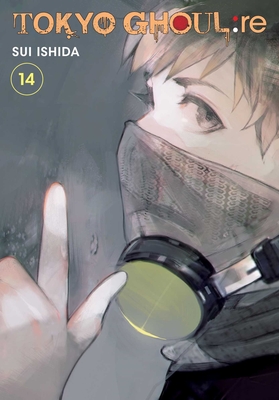 This is book number 14 in the Tokyo Ghoul: re series.

Kaneki was mortally wounded in the CCG attack on the Goat stronghold, and in his desperation to see Touka again, he gorges himself on the bodies of the Oggai. The sudden ingestion of this unusual fuel forces Kaneki into a terrible metamorphosis, the result of which poses a stark new threat to Ghouls and humans alike. Will Kaneki’s degradation be what finally brings the two sides of this ancient war together?
Sui Ishida was born in Fukuoka, Japan. He is the author of Tokyo Ghoul and several Tokyo Ghoul one-shots, including one that won him second place in the Weekly Young Jump 113th Grand Prix award in 2010. Tokyo Ghoul began serialization in Weekly Young Jump in 2011 and was adapted into an anime series in 2014.