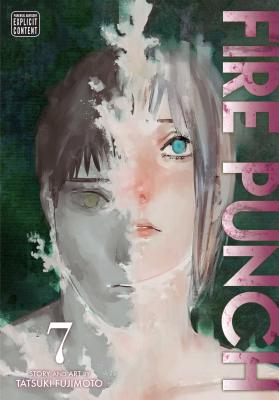 This is book number 7 in the Fire Punch series.

With his promise to Tena imprinted on his mind, Agni can only enjoy an inauthentic peace coated thickly with lies. His existence blames, tortures and undermines him, becoming an affliction worse than the anger, pain and madness he’d experienced as Fire Punch. As Agni searches desperately for an escape from this hell, an old friend suddenly appears.
Tatsuki Fujimoto won Honorable Mention in the November 2013 Shueisha Crown Newcomers’ Awards for his debut one-shot story “Love Is Blind.” His first series, Fire Punch, ran for eight volumes. Chainsaw Man began serialization in 2018 in Weekly Shonen Jump. “Look Back” and “Goodbye, Eri” were published in 2021 and 2022 in Japan to widespread critical acclaim.