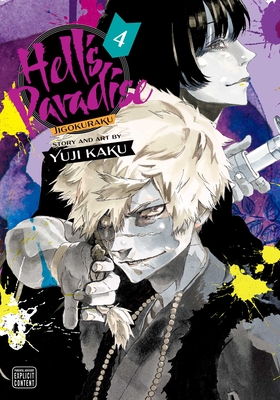 This is book number 4 in the Hell’s Paradise: Jigokuraku series.

Even an invincible ninja may not be able to survive Hell’s Paradise!

The beings collectively known as Lord Tensen are beyond comprehension. These rulers of the mysterious island are deathless, ferocious and nearly invincible. Can Gabimaru the Hollow and his Yamada Asaemon executioner Sagiri survive long enough to reach their goal, despite being forced to contend with immortal monsters?
Yuji Kaku debuted as a mangaka in 2009 with the one-shot “Omoide Zeikan” (Memory Customs), which won honorable mention in the 14th Jump SQ Comic Grand Prix. He went on to write several other one-shots before beginning his first series, Fantasma, which ran in Jump SQ from 2013 to 2014. Hellʼs Paradise: Jigokuraku is his second series.