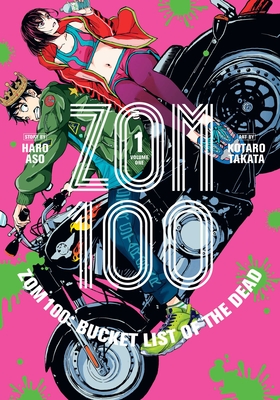 
Available in Warehouse. Wait for Email Confirmation for ETA
Surviving a zombie apocalypse beats a dead-end job any day!

After spending years toiling away for a soul-crushing company, Akira’s life has lost its luster. But when a zombie apocalypse ravages his town, it gives him the push he needs to live for himself. Now Akira’s on a mission to complete all 100 items on his bucket list before he...well, kicks the bucket.

In a trash-filled apartment, 24-year-old Akira Tendo watches a zombie movie with lifeless, envious eyes. After spending three hard years at an exploitative corporation in Japan, his spirit is broken. He can’t even muster the courage to confess his feelings to his beautiful co-worker Ohtori. Then one morning, he stumbles upon his landlord eating lunch—which happens to be another tenant! The whole city’s swarming with zombies, and even though he’s running for his life, Akira has never felt more alive!
In 2004, Haro Aso received Shonen Sunday’s Manga College Award for his short story "YUNGE!" After the success of his 2007 short story "Onigami Amon," Aso got the chance to start a series of his own—2008’s Hyde & Closer. In 2010, his series Imawa no Kuni no Alice (Alice in Borderland) began serialization in Shonen Sunday S. Zom 100: Bucket List of the Dead is his follow-up series.

Kotaro Takata first hit the manga scene in 2009 with Hallelujah Overdrive!, which ran in Monthly Shonen Sunday magazine. In 2017, he served as the artist on another Monthly Shonen Sunday title called I Am Sherlock, written by Naomichi Io. Zom 100: Bucket List of the Dead is his follow-up series.