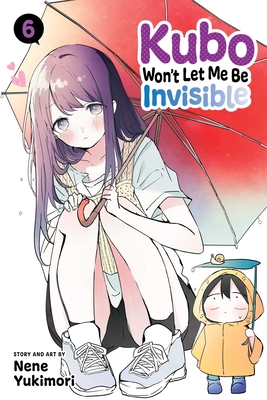 
Available for Pre-Order Now
A social butterfly makes friends with a wallflower—whether he’s ready or not!

Junta Shiraishi blends into the background so much that even his classmates fail to spot him. His goal is to make the most of his high school years, but that pesky invisibility gets in the way…until Nagisa Kubo notices him! Kubo’s playful teasing kicks Shiraishi out of his comfort zone and begins a friendship—or maybe something more?

Sports day has arrived! Shiraishi, Kubo, Tama, Hazuki, and Sudo team up to compete in athletic events like the six-legged race. Can Kubo help Shiraishi earn a victory? As challenging as sports day is for Shiraishi, it might not be as intimidating as having a girl in his room…
Nene Yukimori earned the right to serialize Kubo Won’t Let Me Be Invisible in Young Jump after the manga’s one-shot version won the magazine’s Shinman GP 2019 Season 5 contest. The manga then began serialization in October 2019. The work is Yukimori’s first to receive an English release.