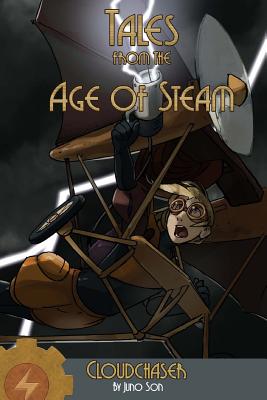 
Available in Warehouse. Wait for Email Confirmation for ETA
This book cannot be returned, cancelled, or exchanged. Please call for availability and pricing
Way, way up high in the skies, great cities known simply as sky-cities hover aloft; one such city is the city of Sparkvale, Massachusetts, which hangs high above the Massachusetts Bay, constantly hidden amongst thunderous storm clouds that lash out with tendrils of lightning. What purpose could such a wild locale for a municipality serve? The answer lies within the lightning bolts themselves; Sparkvale is a sky-city renowned for having the greatest electrical exports you could ask from an American city at the turn of the 20th century. And the people who collect the lightning bolts from which this electricity is taken are known as cloudchasers. One such cloudchaser is the hero of our story, Storm Odinn, a genderfluid teenager with a serious knack for flying on the cloudchasers' clockwork gliders through a stormy sky. There is little doubt that they are one of the best cloudchasers the city has to offer. And yet, they're a very simple person with simple needs; as long as they can fly, Storm is happy. So when a terrible new threat arrives to lock down the skies around Sparkvale, Storm knew they couldn't just sit around and let it happen. But they soon realize that it will take more than wit and flying ability to save the sky-city from total ruination... Take off with Storm Odinn in the imagined world of steam and clockwork, in the Cloudchaser's tale of the Tales of the Age of Steam.